TYLER – Smith County Juvenile Services is teaming up with the Texas Ramp Project to help build ramps for elderly and disabled people who need them but can’t afford them.

“It means a lot,” George Cronin, local coordinator for the Texas Ramp Project, said of having the kids help. “Having their labor means we can build more ramps in a shorter period of time.”

Cronin said most of the people they help are in wheelchairs and do not have a ramp at all, or their ramp has deteriorated so much it has become dangerous. “For somebody who doesn’t have the wherewithal financially to do it, it’s real important,” he said of building the ramps.

To some of the people living by themselves, building a ramp could mean keeping them in their own home and out of a nursing home, Cronin said.

Dave Peters, vocational instructor for Smith County Juvenile Services, contacted Cronin after learning of the organization and helped construct a ramp in August to make sure it was a good fit for the children.  A group of six probationers went out on September 19, 2015, and helped demolish a crumbling porch and build a new deck.

On Saturday, Peters took out five graduates of the HOPE Academy, all of which are part of Juvenile Services’ Mind, Body & Tools vocational program. He said the kids seemed to be very impressed when he explained to them that everything they were doing was free to the homeowner.

“Even though it was cold and rainy, they all felt good about what we were doing,” Peters said.

Cronin said he introduces the children to the people they are building the ramps for so they can see what kind of shape they’re in, he said.

“It’s a healthy thing to expose them to,” Cronin said. “Hopefully, it makes an impression on them.”

Peters said he plans to have Smith County Juvenile Services help construct ramps once a month.

With headquarters in Richardson, Texas Ramp Project is a volunteer-led nonprofit organization that builds ramps for people in need all over the state. The local division covers Smith, Henderson and Van Zandt counties. Through donations from churches and various community organizations, as well as people who volunteer their time, the handicap ramps are constructed at no cost for the people who need them, Cronin said.

Texas Ramp Project at Tyler constructed 76 ramps in the East Texas region last year and have already built 75 so far this year, Cronin said. They have received 111 referrals for people who need ramps built this year, and he expects them to construct about 90 ramps in 2015, he added.

The groups can build a ramp in four or five hours, depending on its size and complexity.

For more about the Texas Ramp Project, visit www.texasramps.org. 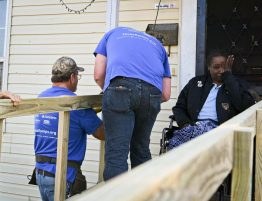 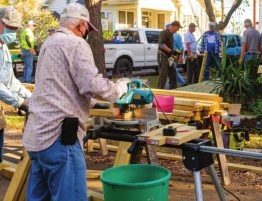 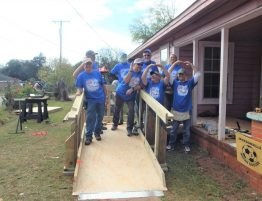